Diabetes is a chronic metabolic disease with the distinctive phenomenon of increased blood glucose levels (hyperglycaemia). It’s caused by impaired insulin secretion (type 1 diabetes) or the improper action of this hormone (type 2 diabetes). Symptoms commonly observed by dog owners are polyuria and increased thirst. The basis for treating this disease is frequent monitoring blood glucose levels, insulin therapy, as well as a well-balanced diet tailored to the food preferences of the dog and any comorbidities.

Stabilising glucose concentration in the blood plays a key role in feeding diabetic dogs. That’s why the type and amount of carbohydrates in food are also very important. It’s recommended that simple sugars be avoided, because they’re absorbed quickly and cause huge fluctuations in glucose levels. Complex sugars are much safer. They take longer to digest, and the glucose is absorbed gradually. Because of this, if you decide to use commercially available dog food, choose canned or dry food. Avoid semi-moist food because it’s high in simple sugars.

If you make your own dog food, when choosing ingredients, use glycaemic index (GI) tables available online. The glycaemic index informs you how the consumption of a specific amount of a given product affects blood glucose levels. The higher the GI value, the higher the level of glucose in the blood after consuming that product. A GI value of glucose of 100 is considered to be the reference point. Examples of ingredients and their GI values are presented in Table 1.

Maintaining steady blood glucose levels helps determine the correct insulin dose. Meals for diabetics should, insofar as possible, have similar ingredients and be low in calories. They should also be regular. It’s recommended that the first half of the daily food dose is given within two hours of the first insulin injection, while the other half approximately six hours later.

Complex sugars include dietary fibre. Fibre decreases the caloric content of meals. In addition, it extends the gastrointestinal transit, which is the time it takes for food to travel through the gastrointestinal tract. As a result, the digestion and absorption of carbohydrates are slower. A high-fibre diet may, in some cases, cause gas, constipation and increased stool volume. That’s why it’s important to observe your pet and modify its daily food intake depending on its needs.

The diet of diabetic dogs should include supplements such as antioxidants, B-group vitamins and minerals – zinc and chromium. Antioxidants, including vitamins E, A and C, as well as lutein and taurine prevent oxidative stress, which has a detrimental effect on glucose metabolism and can contribute to complication in diabetes. On the other hand, supplementation with B-group vitamins is recommended due to their considerable loss in the initial stage of the disease as a result of increased thirst and polyuria. In the case of minerals, their positive impact on blood glucose levels is the main benefit.

Zinc is a microelement that participates in many enzyme reactions in the body, and plays an important role in the metabolism of proteins and carbohydrates. In diabetics, it can be used to control blood glucose levels. Insulin secretion is inhibited by zinc at high doses, and stimulated at low doses. The best source of zinc is red meat. You can also use inorganic sources. Zinc absorption is limited by high concentrations of calcium, magnesium, iron and phytic acid in meals. When including this element in the diet, remember that there can be possible side effects from overdose, such as acute gastritis and haemolytic anaemia.

Another supplement worth noting is chromium – a trace element. It takes part in, among other things, antioxidative processes, regulation of hormone secretion and the metabolism of proteins, fats and sugars. Combined with glycine, cysteine, as well as glutamic and nicotinic acid, it forms the so-called glucose tolerance factor. This increases the tolerance and absorption of sugars by target cells in the body. As a result, it’s easier to control glucose levels. Due to the functions this element has, it is believed that a deficiency can lead to insulin dependence. The best source of organic chromium is thought to be yeast products. In many countries, there are special supplements for dogs that contain chromium picolinate. They’re relatively safe and no side effects have been reported.

Scientists are becoming increasingly interested in vanadium and its effect on lowering blood glucose levels. The mechanism of action of this element is still not fully known. However, it has been shown that used as an additive to water, it doesn’t have much risk of side effects. Studies are ongoing to create a vanadium compound that would have the ability to enhance the effect of insulin and at the same time not have so many unwanted side effects.

Diabetes is an increasingly common endocrine disease. In dogs, it’s unfortunately irreversible and requires lifelong use of insulin. It shouldn’t be disregarded, because it can lead to a range of complications. A crucial part of the treatment of this condition is a proper diet, which helps stabilise blood sugar levels. Supplements have also proved to be beneficial. Their dosage should be consulted with a specialist, as they can be toxic in excess. For minerals, you can also carry out a special test that will show their content in the dog’s fur, and determine possible supplementation based on these results. 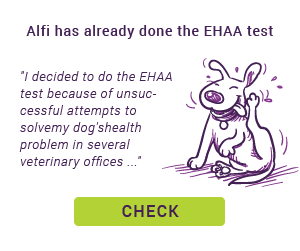